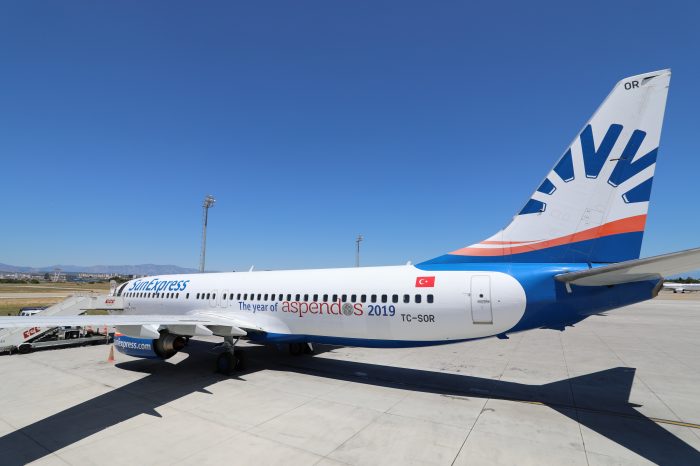 Antalya, July 24, 2019 – SunExpress, which connects Antalya to the highest number of destinations with direct flights on both domestic and international routes, has applied a special livery with the theme “The Year of Aspendos” to support the promotional activities within the scope of the Aspendos Year in Antalya.

2019 was announced as “The Year of Aspendos” as part of a project to diversify tourism over 12 months in Antalya, which is one of the most important tourism destinations in Turkey and the Mediterranean region with its rich historical and cultural heritage as well as its stunning nature and high standards of holiday facilities. SunExpress – named “Best Leisure Airline in Turkey” by Skytrax and also known as the passengers’ choice – aims to contribute to Antalya’s development and promotion of its Boeing 737-800 type aircraft with a special branding of “The Year of Aspendos”.

SunExpress Deputy Managing Director Ahmet Çalışkan said, “As an airline based in Antalya, Antalya is our home. We are the airline that connects Antalya to the most points on domestic and international lines. As one of Antalya’s largest companies in sales and employment, we will always continue to show our support for the development and promotion of Antalya. At the same time, as a member of the Antalya Promotion Foundation, we see it as our responsibility to support Antalya in both economic and tourism issues and to move it further. We wish to greet our guests with our aircraft with the “The Year of Aspendos” theme at every destination we fly from here, Antalya, our tourism paradise that has a very rich history and magnificent nature.”

Aspendos is well known for having one of the best-preserved ancient theaters in the world as well as Roman aqueducts and particularly the Alaeddin Keykubad Bridge, one of the most important structures that reflects the architecture of that historic period.

Attractive prices – excellent service: SunExpress scores again as one of the best leisure airlines: The carrier manages to reach a top position at the Skytrax World Airline Awards
2019-06-19 11:00:32

Frankfurt am Main, June 19, 2019 – Part of the best: At the Skytrax World Airline Awards just given in…