SunExpress starts the Christmas season with the Grinch 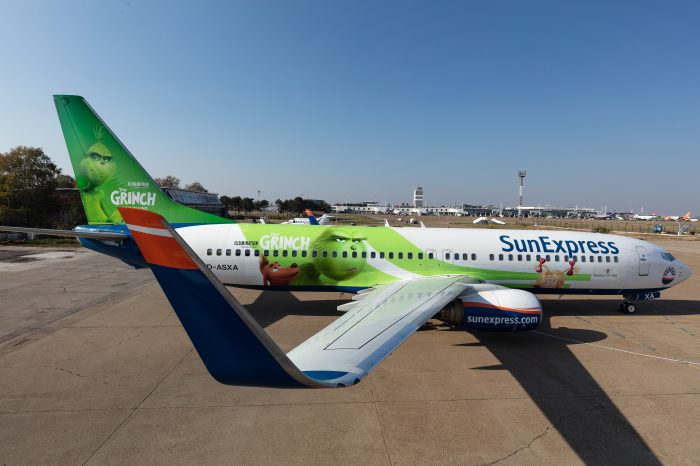 Frankfurt, 13 November 2018 – Christmas on board SunExpress: Just in time for the cinema release of the newly released Christmas classic DER GRINCH, a Boeing 737-800 from SunExpress will be decorated this winter with the green Christmas muffle and can be seen on numerous routes within the SunExpress network.

The special sticker for the animated film was applied in less than two days to the fuselage of the aircraft D-ASXA, which will take off from many German airports up to 12 November. After the Minions, SunExpress is implementing the second film cooperation with Universal Pictures with DER GRINCH. As part of this cooperation, further activities for young and old are planned both on board the SunExpress aircraft and on the ground. On board, there will be matching stockings, backpacks and coffee mugs printed with the charming green creature.

„As a family-friendly holiday airline, the upcoming Christmas season is of course particularly close to our hearts. The Grinch has been part of Christmas for many generations and inspires the whole family. With this special livery we hope to put a smile on the faces of our passengers before departure,“ says Peter Glade, Commercial Director of SunExpress.

Based on Dr. Seuss‘ popular children’s classic „The Grinch“, Universal Pictures produced an animated film in which the popular actor Benedict Cumberbatch lends the Grinch his English dubbing voice. The Christmas film will be shown in German cinemas from 29. November 2018.

About SunExpress:
As a holiday specialist, SunExpress has been offering non-stop flights between Europe and Turkey and attractive holiday destinations in the Mediterranean, Canary Islands, the Red Sea and North Africa for almost 30 years. The joint venture between Lufthansa and Turkish Airlines offers a total of almost 60 international destinations in 20 countries with 1,200 weekly flights. On board of our modern Boeing B737-800 aircraft, we meet the needs of almost nine million passengers annually and provide a comfortable flight experience at a low-cost price. The approximately 4,000 employees of SunExpress ensure this with passion and commitment. Cheap flights, extra services, but also hotels, transfers or holiday accommodation can be booked at www.sunexpress.com

Do you want to work and live in a sunny place? Travel reporters at sonnenklar.TV can expect nothing but good…