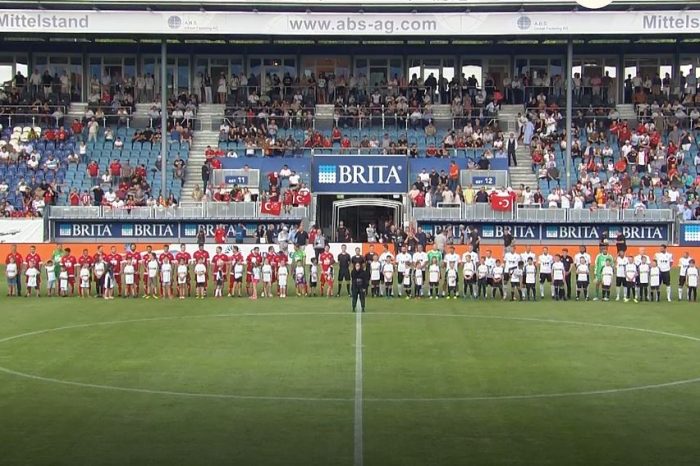 Frankfurt, 16 April 2018 (w&p) – Mario Basler cross, Fredi Bobic header – goal in the BRITA Arena! What sounds like a review is instead an exciting look into the future: the “Verein Deutscher Fußballlegenden” and the leisure airline SunExpress are hosting the “SunExpress Legend Game” on 3 June. Kick-off will be at 6 pm in the BRITA Arena in Wiesbaden. Tickets for the match of a special kind between Türkiye (Turkey) and Germany are now available at www.adticket.de and from 27 March also at the SV Wehen Wiesbaden office.

The German Legends team will be trained by cult coach Otto Rehhagel: His team includes stars such as Fredi Bobic, Mario Basler and David Odonkor. The German team will compete on the pitch with their Turkish friends, such as Hamit Altıntop, Rüştü Reçber and Hakan Ünsal.

SunExpress – a joint venture of Deutsche Lufthansa and Turkish Airlines – has been connecting Germany and Türkiye (Turkey) for almost 30 years and forms a bridge between the two nations for both its employees and passengers. “With the ‘Game of Legends’ we want to set a sign of friendship between Türkiye (Turkey) and Germany. As an airline, however, the joint match also connects nations and cultures – which is why we were immediately enthusiastic about the idea,” says Jens Bischof, CEO of SunExpress.

The club “Deutsche Fußball Legenden e.V.”, founded in 2013, stands up for tradition, team spirit and fairness. The legendary players share a sense of Team spirit and a love of football. Wim Vogel, Managing Director and Board Member of “German Football Legends”, was delighted to have won Sport1, an attractive TV partner, who will broadcast the match live in full length: “Even when penalties are taken! But sure of victory, Mario Basler threw in: “It won’t come to that…”

I’m very happy with our team, they’re all first-class footballers”, German coach legend Otto Rehhagel is pleased about a strong line-up in Wiesbaden, including world footballers Fred Bobic, Oliver Neuville, Guido Buchwald and Mario Basler: “It’s not quite as fast anymore, but it’s nice to look at. The spectators will enjoy themselves – especially when Mario is on the ball. He pleases the spectators, but not always the coach”, “König Otto” remembers the times in the Bremen Bundesliga together with “Super Mario”.

The former Dortmund Bundesliga professional Erdal Keser is in charge of the Turkish selection and also unveiled an excellent line-up around the old international Yildiray Bastürk, Hamit Altintop, Bülent Korkmaz or Rüstü Recber. Otto Rehhagel also showed respect: “Türkiye (Turkey) always had very good footballers who were technically perfect. We can expect a big game!” And Erdal Keser promised with a wink: “Turkish players get better and better from the age of 35…”

The idea for the friendly match came from the Wiesbaden architect Michael Müller. His goal was to bring cultures closer together through football – a sporting event seemed to him to be the right setting and SunExpress, as a German-Turkish airline, the ideal sponsor.

About SunExpress:
As a holiday specialist, SunExpress has been offering non-stop flights between Europe and Türkiye (Turkey) and attractive holiday destinations in the Mediterranean, Canary Islands, the Red Sea and North Africa for almost 30 years. The joint venture between Lufthansa and Turkish Airlines offers a total of almost 60 international destinations in 20 countries with 1,200 weekly flights. On board of our modern Boeing B737-800 aircraft, we meet the needs of almost nine million passengers annually and provide a comfortable flight experience at a low-cost price. The approximately 4,000 employees of SunExpress ensure this with passion and commitment. Cheap flights, extra services, but also hotels, transfers or holiday accommodation can be booked at www.sunexpress.com