The return of the Eagle: Eintracht Frankfurt takes off together with SunExpress 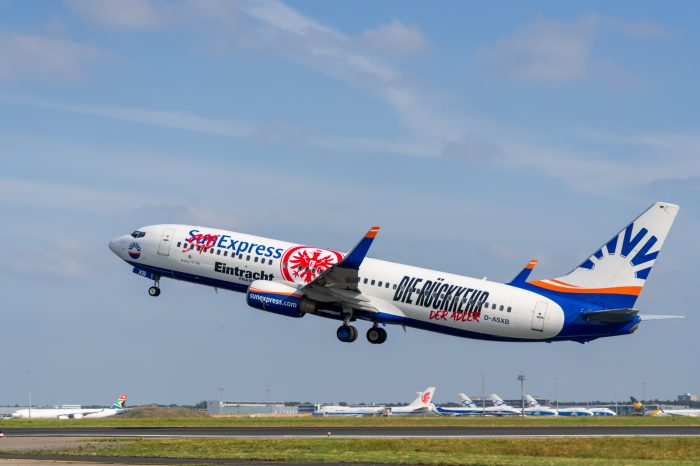 The holiday airline operates four special flights for the SBU and will start with special stickers on its B737-800 NG for the DFB Cup match.

Frankfurt, May 15, 2018 – Eagle Attila on the road in the SunExpress route network: The holiday airline SunExpress, headquartered in Frankfurt, is taking off for Eintracht Frankfurt’s DFB Cup game with a Boeing B737-800 NG in the look of the Bundesliga club’s most important season game. Together with team mascot Eagle Attila, the slogan “The Return of the Eagles” has adorned the SunExpress jet with the identification D-ASXB since May 15. SunExpress will operate a total of four special flights on 18 May and 20 May 2018 – the last one even with a particularly prominent crew on board: The soccer club “Eintracht” will begin its return from Berlin to Frankfurt on 20 May 2018 with the entire delegation in the Boeing B737.

The time was short: Only 24 hours were planned for gluing the fuselage of the Boeing B737-800NG. A masterstroke that took place in Antalya, Türkiye (Turkey), due to the better weather conditions. The aircraft in harmonious look landed in Germany yesterday evening.

The first special flight for Eintracht is then planned for 18 May from Frankfurt to Berlin: The return to the DFB final, according to the official hash day of Eintracht Frankfurt, will take place one day later.

“As official partner of Eintracht, we didn’t think twice and support the association not only as partner, but also visually with our special livery. For us, this is a clear commitment to Eintracht Frankfurt, but also to the region and its airport, from which we have been flying travellers to Türkiye (Turkey) and other holiday destinations for decades,” says Jens Bischof, Managing Director of SunExpress.

On 19 May 2018, FC Bayern Munich and Eintracht Frankfurt will compete against each other in the final match for the DFB Cup at the Olympiastadion Berlin. Last year the Frankfurt boys had already qualified for the cup final. Now SunExpress wants to give them an extra portion of power with the special aircraft livery. The SunExpress jet will continue to be used on the SunExpress network even after the DFB game. Therefore, fans and tarpaulin spotters should pay particular attention to the sky in the coming weeks and months – because it may well be that they will see Adler Attila up there.

About SunExpress:
As a holiday specialist, SunExpress has been offering non-stop flights between Europe and Türkiye (Turkey) and attractive holiday destinations in the Mediterranean, Canary Islands, the Red Sea and North Africa for almost 30 years. The joint venture between Lufthansa and Turkish Airlines offers a total of almost 60 international destinations in 20 countries with 1,200 weekly flights. On board of our modern Boeing B737-800 aircraft, we meet the needs of almost nine million passengers annually and provide a comfortable flight experience at a low-cost price. The approximately 4,000 employees of SunExpress ensure this with passion and commitment. Cheap flights, extra services, but also hotels, transfers or holiday accommodation can be booked at www.sunexpress.com