The Smurfs are out! SunExpress becomes the smurfiest airline in Germany 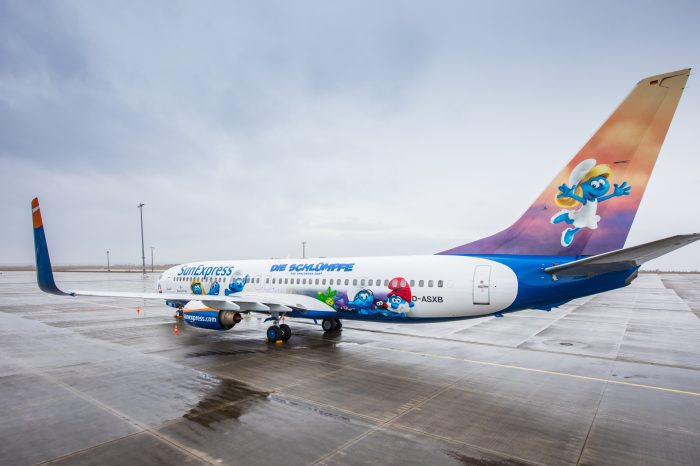 SunExpress becomes the smurfiest airline in Germany and the mentor of Sony Pictures new film “Smurfs: The Lost Village” which will be shown in the cinemas after 6th April 2017.
In this fully animated, all-new take on the Smurfs, a mysterious map sets Smurfette and her best friends Brainy, Clumsy and Hefty on an exciting and thrilling race through the Forbidden Forest filled with magical creatures to find a mysterious lost village before the evil wizard Gargamel does. Embarking on a rollercoaster journey full of action and danger, the Smurfs are on a course that leads to the discovery of the biggest secret in Smurf history!
One of our Boeing 737-800 already got cleaned within 17 hours and was plastered with 130 m² of material in total. The Smurf plane is currently flying on different routes, always starting from Stuttgart and Düsseldorf into the sun!
Before the official presentation of the plane, walking characters visited the headquater in Frankfurt and provide a smurfy atmosphere.
For celebrating our new branded airplane, we invited 30 kids from the Eichendorff-Schule from Offenbach (Germany) to a special event at the Frankfurt airport. They belong to the first who saw the SMURF-express. The kids had the chance to look at the very big figures at the plane and were surprised by walking characters who came through the blue carpet. The kids and our guest had the chance to take pictures with Papa Smurf, Smurfette and Brainy Smurf.

On 24 November 2016 the Supervisory Board of SunExpress appointed Jens Bischof as Managing Director of SunExpress, a Deutsche Lufthansa/Turkish…

Holidaymakers benefit from the reliable direct connection to Antalya A proud anniversary at Saarbrücken Airport: Since 1993, the leisure airline…