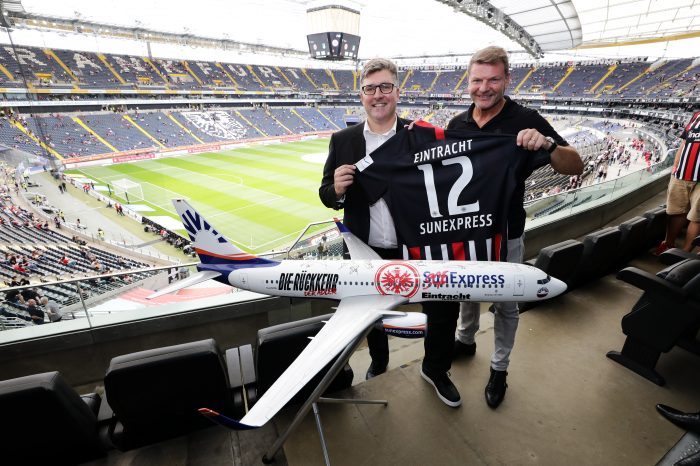 Frankfurt, 26th August, 2019 – Eintracht Frankfurt starts into the new football season together with SunExpress as their airline and premium partner. The airline, a joint venture between Lufthansa and Turkish Airlines, has accompanied the Hessian Bundesliga club since April 2017.

The expansion of the partnership pays tribute to the positioning of SunExpress as the airline of sports. It is a further strategic step in addressing the sports target group among which the airline is already well known and popular. The partnership enables SunExpress a broader and more precise targeting in the future. Whether hobby sportsmen, professionals or entire teams – they all appreciate the large choice of direct routes, the professional transport of sports equipment and the airline’s great flexibility.

Jens Bischof, CEO of SunExpress states: “As the Airline of Sports we are very happy to continue accompanying Eintracht on its journey to new great achievements and being the team’s reliable and flexible airline partner. Our commitment to Eintracht underlines our focus on sport and the interests of all sports-fans amongst our customers. We are dedicated to fulfilling their special requirements by being very flexible and innovative.”

The expanded partnership aims to increase the airline’s profile in the long term. In addition to the classic LED and static bands in the stadium, it includes various logo presences as well as innovative joint campaigns on social media. A special highlight awaits Eintracht fans in the next year: They will then have the opportunity to vote on the new Eintracht Frankfurt special livery, which will be displayed on a SunExpress Boeing 737 in 2020, replacing the “SGE-Express”.

“With a modern and internationally oriented brand like SunExpress, we are very well positioned in the flight segment. We especially appreciate the flexibility and innovative ideas of this outstanding partnership. Here, the special branding of a machine during the Cup Final in 2018 comes immediately into mind”, said Axel Hellmann, Member of Board at Eintracht.

For the DFB Cup Final in May last year, SunExpress had equipped one of its machines with a special livery, which received large attention on an international level. Within only 24 hours, a Boeing 737-800 in Antalya was transformed into the “SGE-Express”. In total, four special flights around the summer football highlight were carried out with this aircraft. Unforgotten: The return to Frankfurt after the final, when the entire crew on board celebrated the historic victory. Also during the last Europa League season 2018/2019, SunExpress offered several fan flights to the top games of the Adler against Rome, Lisbon or Milan.

As a holiday specialist, SunExpress has been offering non-stop services between Europe and Türkiye (Turkey), as well as to popular holiday destinations on the Mediterranean, the Black Sea, North Africa and the Red Sea coasts for almost 30 years. This year, the joint venture between Lufthansa and Turkish Airlines has been operating the largest fleet in its history, with 84 aircraft serving 90 destinations in 30 countries. In 2018, SunExpress welcomed almost 10 million passengers. The airline, which has received numerous awards for its service, provides customers with a comfortable flying experience at the best value and scores highly with its wide range of innovations and digital travel services. For more information, please visit www.sunexpress.com.

SunExpress, which connects Antalya to the highest number of destinations with direct flights on both domestic and international routes, continues…